Shaken but not stirred

How often have you shaken hands with someone and ended up feeling:

Come on, be honest with me. I don’t know about you but a large proportion of the countless handshakes I’ve had over the years have left me feeling one or more of those unwelcome emotions. I’ve then spent the few minutes immediately subsequent to the initial encounter frantically trying to block the experience out of my memory.

Now transfer this to an interview situation. Ridiculous as it may be, just through an unsatisfactory handshake, you have ‘single-handedly’ (sorry but I really couldn’t resist that joke) destroyed the critical opening few moments of contact during which you make a lasting impression on the other party.

It’s an old saying but it’s every bit as true in the Electronic Age as it was in the Stone Age and, if you’re getting the interviews but not the job offers, maybe you should stop and examine the way in which you are introducing yourself. It could be that you are unconsciously giving out bad vibes about yourself.

And I’m not the only one who thinks that way.

A recent survey of about 2,000 people turned up that 400 of them openly judged others by the way in which they shook hands. If you add in those who almost certainly do it subconsciously, that represents an absolutely staggering percentage. It also means that if your shake is less than firm and confident you may as well turn round and head back home.

But why is this? Why are handshakes so important to us? 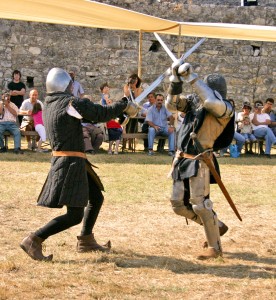 How interviews were conducted before handshakes were invented.

There are a host of different explanations about why a right-handed handshake is the preferred greeting ritual for two people who already have or who are looking to have a professional or formal relationship (such as in a employer-job applicant situation). The most likely origin stems from the Middle Ages when strangers meeting could demonstrate that they were not threatening the other by presenting an unarmed hand at full stretch. The specific choice of the right hand over the left could be down to the Christian belief that the left path is that of the Devil or, alternatively, from the Muslim doctrine that the left hand should be reserved for aiding the less sanitary of body functions. Or it may of course just be due to the fact that there are more ‘righties’ than ‘lefties’ therefore the right hand is statistically more likely to be the one that is carrying a weapon.

Further substantiation of the medieval origin for handshaking is that, until relatively recently, it was very gender specific: since women were less likely to carry a weapon, handshaking was predominantly a male thing. However, nowadays that’s no longer so (I mean the bit about it being exclusively a male domain, not the weapon carrying notion) and having a solid and confident handshake is essential for both genders in order to succeed in the ever more competitive job-seeking world.

Returning to that percentage of people (like me) who pay close attention to the body language of greetings, it is clear that possessing a strong, confident, inspiring, healthy handshake is every bit as important as a finely-tuned resume. While the latter gets you into the interview room, the former can keep you under consideration.

With all that in mind, have you ever wondered which type of handshake you have? 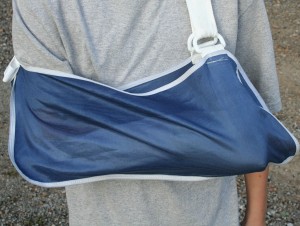 A victim of the bonecrusher school of handshakes

Rather than list the different types of handshake, here’s an excellent video that was on Fox. Not only does it show the main handshake types in action, it also explains what each tells the other party. Since nine of these ten different shakes are no-no’s, it’s pretty easy to focus down on the one to adopt.

And returning to the catchphrase coiner in our title, watching and listening to James Bond meeting and greeting people is an excellent study in body language. The way Bond holds himself and the firm and positive ‘tells’ that he gives off have clearly always been a salient part of Cubby Brocolli‘s conveying of Bond’s charm. Notice the way that he is both a “Man’s man” and a “Ladies’ man” at the same time. Accordingly, there is much to gain from observing the way in which the various incarnations of the character (as portrayed by Connery, Moore, Lazenby, Brosnan, Dalton, Craig) have all displayed the same signals (confident stance, eye contact, enigmatic smile etc). Now imagine a ‘limp lettuce/shrinking violet’ type Bond or a gruff ‘shake-your-arm-until-it-drops-off’ sort.

It just doesn’t work half as well, does it?

The very fact that Bond says his name twice in his introduction (“My name’s Bond. James Bond”) is memorable in itself. In a less positive character displaying more submissive gestures, this needless repetition would just weaken him further, making him sound very uncertain or desperately lacking in confidence. However, this same repetition said with a firm and confident handshake, a leaning forward by Bond to further emphasize the contact, and his full-on eye contact, makes it very strong. In the film, you know that it’s mainly said to antagonize the ‘bad guys’ but in your job-seeking it can demonstrate that you are a force to be reckoned with. However, one word of caution. Don’t overdo the eye contact (just keep it full-on for the duration of the handshake) as it can make you look too aggressive.

So, will you stir the interviewer with your handshake?

Your homework is to practice on friends and family and, if we should meet in some corner of a foreign field etc, I just hope that you won’t feel I’ve fallen foul of another one-liner famously uttered by 007 (in the re-make of Casino Royale): “Why is it that those who can’t take advice, insist on giving it?”