In the first two parts of this series (Part 1, Part 2), we looked at the need for networking and what behind-the-scenes preparation you should do. Now, in this final part, we’re going to look at the actual networking events and how to get the best from them.

Just to reiterate (because I really can’t say it enough times), preparation is king. I don’t want to put undue pressure on you but you may well only get one shot at some of the more important people and you need to get it right first time.

But don’t let that un-nerve you!

It’s not just me who thinks networking is important – see this news article.

I recommend getting 2 sets printed – one for you as a company person and one for you as a private individual as there will be times when one is more appropriate than the other.  For example, it may be that you don’t want someone getting involved with your place of work. Perhaps it’s to do with a new job offer?

For both cards, go for a simple, easy-to-read design without flashiness. There are dozens of internet companies who will produce these for you for just a few dollars. A basic design is both easy to read and professional-looking so K.I.S.S.

Who shall I be today?

Get clear in your head who you are and where you want to go with your life. The people whom hopefully you will be meeting will admire strength and confidence and, no matter how hard they might try to the contrary, they will ultimately shy away from signs of weakness and hesitancy.

Figure out what you want to be and how you are going to get there. You should also work out what you can offer your contacts because, after all, this is just one big self-help scheme. We discussed this in the last section so I’m not going to spend long here on it but it does link in with what I’m going to say later.

Whether it’s an organized networking event or an event at which networking is possible, there are going to be two main opportunities for you to add valuable contacts to your growing database of ‘handy people’.

For ease of discussion, I’m going to assume that this is your first event and you know nobody there. Hopefully that should be your worst-case scenario.

The chances are that many of the people present will know each other and will take the opportunity to get reacquainted. As a result, if you rush in to press the flesh while they are exchanging small-talk, you will be perceived as a nuisance. Therefore take your time at the start of the event to carry out a careful reconnaissance. Five minutes watching and noting who goes where and with whom will pay dividends later.

Let the conversations die back a bit before you make a move to join a group. If they are experiencing an ‘awkward silence’ moment they will be glad of a distraction – that’s you.

In order to break into a group, you really need either an introduction or some kind of ice-breaker. I’ve given some suggestions for opening remarks a bit later in this article. 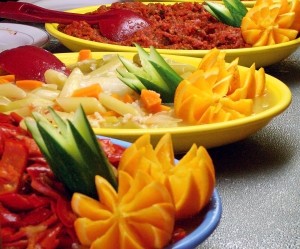 How many stains does this represent?

Once food is introduced, it’s back to an ‘every man for himself’ situation. If you don’t believe me, study the faces and body language of two social acquaintances when they are both considering taking the last sausage on a stick. If they could bare teeth and snarl they would.

Thus, as long as you aren’t challenging for food, this is a good situation for breaking through social barriers and getting a conversation going.

You can easily achieve a high status by appearing to have already eaten (high ranking animals feed first). So, grab a sandwich or two before you leave home and then just content yourself with the odd nibble at the event.

Not eating also gives you time to think and allows you to preserve your dignity (no food down best clothes, no spluttering an answer while your mouth is full of potato chips etc).

There are five basic openings to a conversation in this situation. These are:

Starting by introducing yourself can be a bit intimidating for some people. After all, they may not want to know you. In such an uncontrolled situation where there is no guarantee that either of you have anything (interests, career aspirations, chosen industry etc) in common, leading out with your name is not the best choice.

Far better to test the ground with one of the other openings. Keep a careful eye on their body language to see if it is (or becomes) open – that is their arms unfold, they start to mirror your stance, look you in the eye, visibly relax etc. If so, you have made a contact – you just now need to work on establishing a rapport. If not, then politely terminate conversation, just realize that you have “spotted someone …” and move on.

Rehearse some harmless and amusing jokey-type comments beforehand (try them on a friend first if you can).

With regards to your name, wear a name badge on your right lapel. That way, when you shake hands, the badge will move up towards their eyeline – just monitor whether they show any interest in it.

Here is a really funny video but, nevertheless, one which serves to illustrate exactly what I’ve been saying. See how many mistakes you can spot (gold star possibilities at the end of the blog).

Remember at all times, networking is very similar to dating. It is not about filling your address book with names and phone numbers – if that’s your game just go to any conference and play ‘Swap business cards’. No, networking is about making lasting, symbiotic business relationships and you won’t do that by being ‘lame’.

Let’s return to the dating analogy. If you had finally plucked up the courage to talk to a potential girlfriend/boyfriend, how would you like to leave it?

“Maybe you might ring me sometime or I could phone you, perhaps?”

“I’d really love to take you out – are you doing anything on …?”

Cheesy examples? Yes, guilty as charged. But you get the point? If you want to call this person a true ‘network contact’ then you need to get them to like you, value you, and want you as a contact. Thus, go with the attitude that making one or two good contacts is infinitely better than dozens of ‘names and numbers’.

If you’re still a bit uncertain about breaking the ice, I’ll look at that in detail in a later blog. For the moment, just believe in yourself and never ever concern yourself with the notion of ‘feeling a fool’.

People who don’t try are fools, not those who do.

Finally, never turn any potential network contact away on the grounds that they are irrelevant. You cannot possibly know who or what you will need in the future nor should you discriminate on such grounds. If someone is keen to know you, seize the day, shake hands, get to know one another and add them (and all their contacts) to your growing list.

Gold star if you spotted his ID badge was on the wrong lapel.